While working on a steering mechanism for my robot, I wanted to record the current draw of the motors. The data would give me a rough idea about the friction in the mechanism so as to decide whether I need a different motor controller or different ideas. How can I go about collecting the data?

To feed the motors during testing, I use RuiDeng DPS power supply, which can provide the data over Modbus. There is an app for Windows and Android to read it, but I couldn’t find anything suitable for MacOS. Given that Modbus is a standard protocol for connecting industrial devices, would it be a ridiculous idea to develop a generic library to use it with this power supply and other devices? It turned out that somebody developed such a library.

Perhaps the best implementation comes from SILA Embedded Solutions. The library is small and clean, and it supports different platforms, which is a huge plus. But I needed a bit more. Different applications that I have in mind would require me to duplicate the code that uses the library. That’s how Bus Adapter project came about. The software generates a C++ interface for a program to interact with a Modbus-compliant device or for building my own.

This post describes how I used Bus Adapter to get the data from the power supply.

The first step is to create a model of the Modubs device. A model describes registers that the device supports. It may also contain other attributes that help to generate source code.

The table below represents power supply’s registers, which will be used to create its model.

To automate assignment of register IDs, the registers are split into groups. The registers within a group are contiguous. The first register has an ID of start_id attribute. IDs of the following registers are incremented every word, which takes 2 bytes.

Power supply’s document indicates that there are ten consecutive instances of the third group. Attribute repeat specifies that. The code generator will now add an additional parameter to the interface to distinguish between the instances.

Decimal points are useful for displaying the values. Floating-point types are not used for data storage or by Modbus protocol.

The build uses cmake modules from cmake-helpers project. The modules implement common procedures for cross-platform development. To build reader and writer programs for the power supply, I use the following project structure:

Root CMakeLists.txt contains instructions to set up module path and to include the module main_project:

CMakeLists.txt at src/x86 configures some definitions and the main dependency, Bus Adapter:

Once the build is set up and the model is complete, I start the build process using a shell script:

At this point, the build is done and I store serial link parameters to a configuration file to avoid typing them on every run:

After starting up the power supply, I request it to load preset number 2, which on my unit has output voltage set at 12, and maximum amps at 5:

Next, I turn the power on:

Now, I can start recording the required information using dps-reader:

The program logs the preset values as well as voltage and current being supplied: 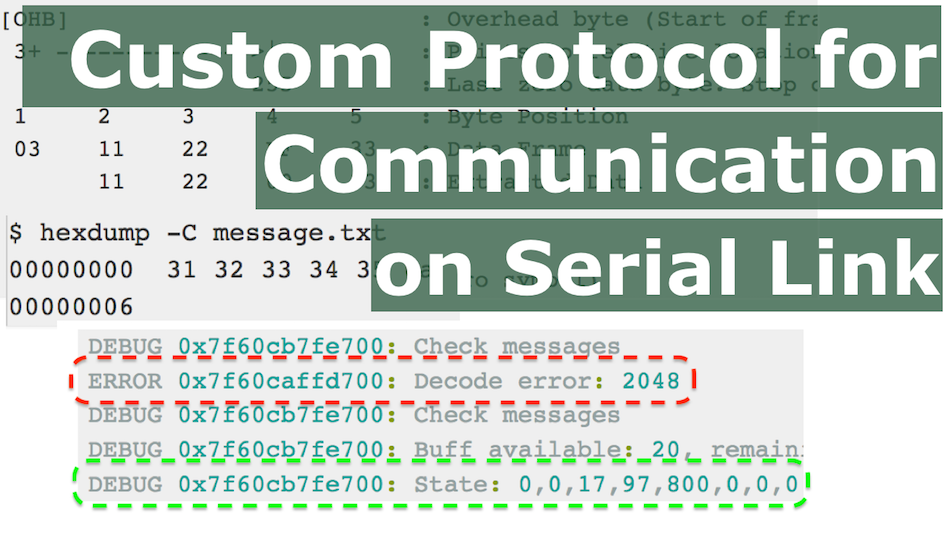 For my current project, after considering a couple of options, I chose to develop a custom communication protocol to connect two programs: one runs on Arduino and another on a Raspberry Pi (RPi). In this post, I’d like to share my experience of going through the development process.